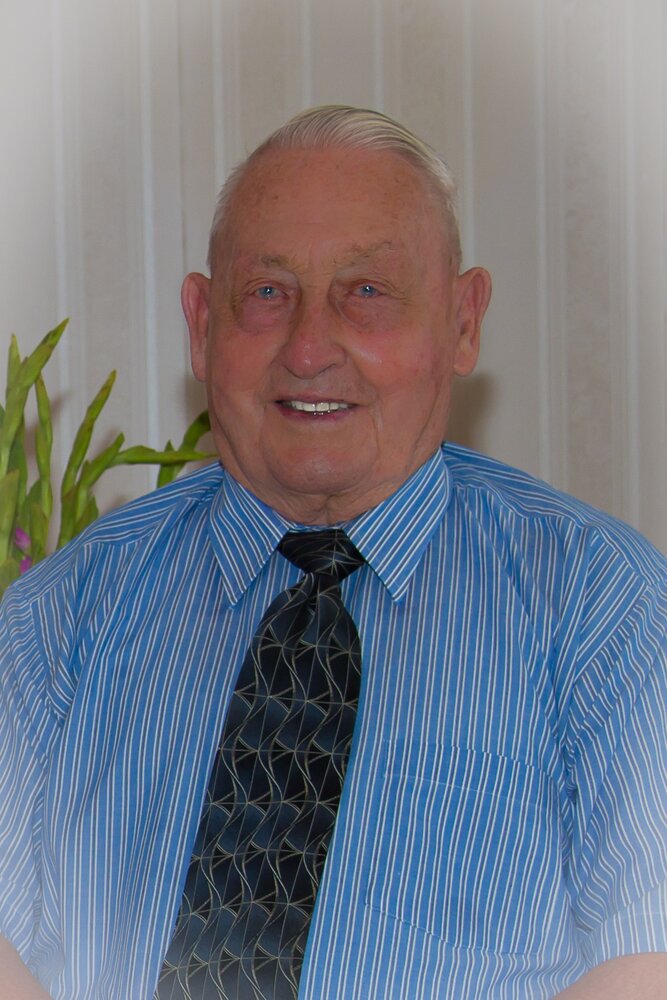 Mr. Raymond “Ray” Thomas Monahan was born on June 5, 1923, in Ratters Corner, NB. He was the son of the late Ambrose and Catherine (Durham) Monahan and husband of the late Elizabeth “Betty” (Hayes) Monahan who passed away in 2017.

Soon after the marriage to the love of his life Betty, they were blessed with eight wonderful children. To support a family of this size, Ray had to go out to work as a car salesman and put in long hours to do so. In 1953, he began working for Patriquen Motors where he would spend a large portion of his working career, before moving to J Clark & Sons from where he would retire in 1994.

Ray had a deep love for his family, especially his great grandchildren which he lovingly referred to as his angels. He also cared deeply about his roots, the old home in Ratters Corner and of course his daily feed of pancakes. When he wasn’t found selling antique stoves or collecting antique cars; he would most certainly be found in the old rocking chair in the garage. His friendly wave and big smile will be dearly missed.

He was the last surviving member of his immediate family.

Mr. Raymond Monahan of Sussex passed away at the Sussex Health Center with his family at his side on August 31, 2021 at the age of 98.

Along with his parents and his loving wife, Ray was predeceased by his daughters: Jean Goddard and Marilyn Page; his sisters: Kathleen Cummings, Mary Ellen (Nellie) Hourihan, Irene Monahan, Grace Mercer and Peggy Brown and his brothers: Leonard Monahan, Ambrose Monahan and William (Bill) Monahan.

Arrangements have been entrusted to the compassionate care of Wallace Funeral Home, 34 Sunnyside Drive, Sussex, (506-433-1176). A Mass of Christian burial will be celebrated held from St. Francis Xavier RC Church on Monday, September 6, 2021 at 11:00 am.

If you are considering making a memorial donation the family has recommended the Canadian Cancer Society, Sussex Health Center or to the memorial of the donor's choice.

The family would like to express their deepest thanks to Earle for the compassionate care and home cooked meals and Ray’s caregivers: Julie, Bonnie, Cecilia and Diane; he truly loved his girls and to the Sussex Health Center palliative care unit for their kindness, care and compassion will never be forgotten.  A special thank you to his wonderful neighbours George and Moyra Long for all their kindness shown to Mum and Dad over the years.

Share Your Memory of
Ray
Upload Your Memory View All Memories
Be the first to upload a memory!
Share A Memory