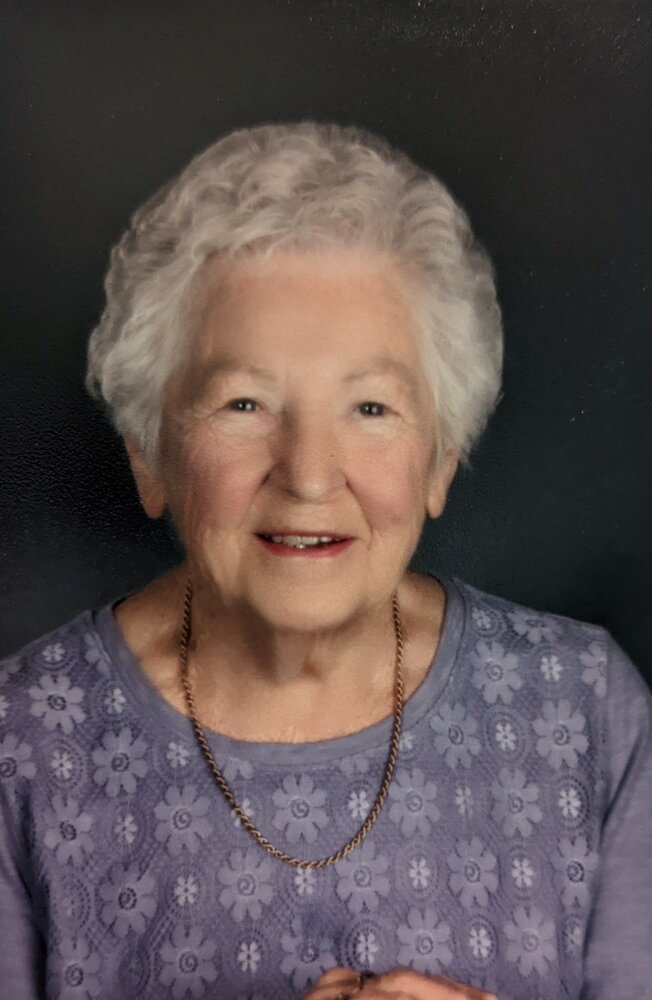 Mrs. Carolyn Alice Erb was born an early Christmas present on December 22, 1928 in the small rural community of Diligent River, NS to Charles and Blanche (Boyd) Robinson. The Robinson clan were overjoyed by their new addition. Alice was the baby of the family, arriving over 10 years after her siblings: Mary, Boyd and Bill. Because of such an age gap, Alice was doted on by her older siblings, they played an integral part in her young life.

Upon completion of grade 11, Alice headed off to Acadia University to study Arts and Secretarial Studies in 1945. Encouraged by her sister to pursue higher education, graduating in 1949.

Alice met James Kenneth Erb in 1947 at Acadia University during her second year. Their love blossomed at Acadia and because of this, Wolfville always held a special place in their hearts. They were married in Parrsboro, Nova Scotia on September 16, 1950 and together they would build their life together with children, grandchildren and 47 beautiful years together.

Kenneth uprooted his family to rural New Brunswick with visions of Idyllic farm life, inspired by his work with potato farmers in Maine. Alice stayed busy overseeing the farm work, harvesting, organizing the farm hands and keeping the house running until 1988.

After Kenneth’s passing in 1997, she remained active through her volunteer work with her church, Sussex Baptist Church which she attended for over 50 years and the Royal Chapter of the IODE of Sussex NB, of which she held Provincial Life Membership. Alice was involved in programs promoting early reading and scholarships to continue higher education. Some of Alices highlights were attending school closings and graduation ceremonies on behalf of the IODE. She managed to keep a close eye on her beloved Blue Jays baseball team and the Toronto Maple Leaf’s through their ups and downs. She also joined a bridge group of eight women and enjoyed that for several years. She was a member of the Pleasant Lake Fishing Club and a past member of the Kings Central Boys Scouts of Canada.

Her legacy is that of love and kindness, filled with memories of Pleasant Lake, winters in Myrtle Beach and countless time spent with her children and grandchildren. She was a woman of Faith, Love and she was an anchor for those who held her dear. She will be deeply missed.

She was the last surviving member of her immediate family.

Alice Erb of Mill Cove formerly of Sussex Corner, passed away at the Dr. Everett Chalmers Hospital after a period of brief illness on September 5, 2022 at the age of 93.

Along with her parents and husband, she was predeceased by an infant daughter, Catherine Jean, her brothers: William and Boyd Robinson and by her sister, Mary Porter.

Arrangements have been entrusted to the compassionate care of Wallace Funeral Home, 34 Sunnyside Drive, Sussex, (506-433-1176). A service celebrating Alice’s life will be held from Sussex Baptist Church on Friday, September 9, 2022 at 2:00pm. At the family’s request Masks are Mandatory.

In lieu of flowers, donations in Alice’s memory may be made to Cystic Fibrosis, Diabetic Association or to the charity of the donor’s choice. Personal condolences to the family and donations may be made through WallaceFuneralHome.com

Share Your Memory of
Alice
Upload Your Memory View All Memories
Be the first to upload a memory!
Share A Memory