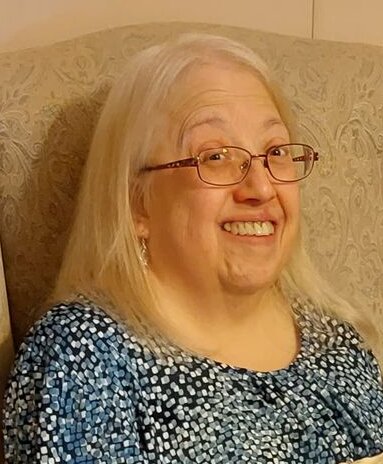 It is with deep sorrow and much love that we, the extended family mourn the sudden passing of Angela Sue Kyle of Sussex Corner, formerly of Geary, NB on September 23, 2022 at the age of 61.

Angie was born in Fredericton on March 7, 1961; spending her younger years in Burton, she moved to Geary where she would remain until late 2012 when she moved to Sussex Corner.  While Angie was living in Geary she was very active with the Sunday School and loved doing many crafts with the children. She also fostered many foreign children during her lifetime. When one child would become of age, she would take on another.

Angie was one of the most thoughtful and giving people you would ever meet. She was always giving any help she could. It was not uncommon for Angie to go shopping and see clothing, footwear, school supplies and much more and then she would purchase these items and donate them to the Salvation Army or Sussex Sharing Club, under the stipulation that they were not sold but given to people who could not afford them. It was Angie's belief that everyone deserves to receive something new at some point in their lives.

Angie graduated from High School in 1979 and went on to UNB where she would make the Dean's list and go on later to attend Compu College. During Angie’s work life she worked in many retail stores starting in the position of Sales to Manager. Her last employment was as an operator with a British Columbia energy company.

Angie was a great niece, cousin and friend and she could liven up any gathering with her wonderful personality and quick wit. She made many friends bowling, playing cards and just about everywhere she went. She was also a wonderful daughter to both of her parents and in the last couple of years this became more evident as Gladys’ health deteriorated, Angie never left her side

Angie will be lovingly remembered by all her relatives and friends far and wide, especially her aunts: Eva Carter of Riverview, Ethel Jeffrey of Hampton and Shirley Pollock (Ernest) of Picadilly. She was predeceased by her loving parents, Lewis and Gladys (Stackhouse) Kyle.

Arrangements have been entrusted to the compassionate care of Wallace Funeral Home, 34 Sunnyside Drive, Sussex, (506-433-1176). A Celebration of Angie's life will be held on Monday, October 3, 2022 at 1pm from Geary Baptist Church. The interment will take place in the Geary Waterville French Lake Memorial Cemetery followed by a reception at the church.

Donations in memory of Angie, may be made to the IWK Hospital or to the charity of the donor’s choice.  Condolences to the family and donations may be made through WallaceFuneralHome.com

Share Your Memory of
Angie
Upload Your Memory View All Memories
Be the first to upload a memory!
Share A Memory